“Access to justice remains one of the fundamental principles of the rule of law. Access to justice consists of the ‘ability of individuals to seek and obtain a remedy through formal or informal institutions of justice for grievances.’ “– American Bar Association

According to the World Justice Report published in 2019, 66% of the people in the United States experienced a legal problem in the past two years. Out of those, only 33% were able to access help. 24% did not know where to get the relevant advice and information from. 29% of the people were not confident if they could achieve a fair outcome. Such numbers signify how access to legal justice is still such a big problem for the world’s biggest superpower – United States of America. 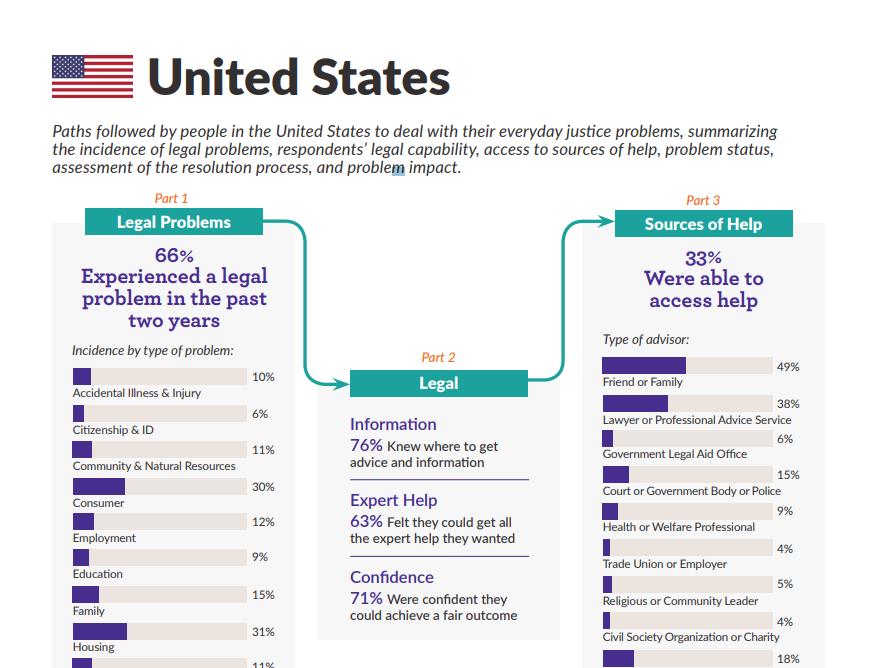 Some people might argue that the lack of resources could be a reason behind these numbers. However, according to an article by Law School Tuition Bubble, “There is no evidence of a general shortage of lawyers anywhere in the United States.“ You can also see in this article how in almost every state, there is a huge percentage of excess lawyers (people having a law degree but not practicing law, either due to lack of work or working in other functions). The District of Columbia and New York have the most number of excess attorneys per 10,000 residents.

As stated in an article in The Atlantic, ”One of the most perplexing facts about our perplexing legal market is its failure to provide affordable services for just about anyone but rich people and corporations. In a democracy steeped in rule-of-law, justice-for-all platitudes, this lack of access to affordable legal help can feel worse than perplexing—it can feel like an outrage. Slowly, however, the system is evolving.”

Another recent law review article notes, “The typical legal services consumer in the U.S. makes approximately $25 per hour, and is priced out of the services lawyers provide even at low attorney rates of $125-$150 an hour.” This shows how pricing is one major hurdle to access legal help.

Being inspired to solve this problem – making legal help accessible to everyone, we have created InstaLaw to enable access to experienced lawyers within minutes. Our initial areas of service are Immigration and Intellectual Property law. As a limited launch benefit, we are offering a complete platform fee waiver(up to $25). Additionally, you can earn up to $500 by referring your friends: get Amazon gift cards worth $5, after your referee uses the service for the first time.